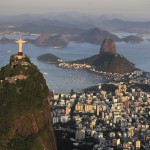 With just over 100 days to the Opening Ceremony of the Olympic Games many people are getting ready to head down to Rio de Janeiro. Some for work, some for play and some for a bit of both. Most of us picture ourselves playing (or rather watching) futvolei on the beach sipping at fresh coconut water when we think of a long term project in Rio de Janeiro. So why is it that so many foreigners working in Brazil call HQ once a week with alarming stories about unmet deadlines and Brazilian colleagues who don’t do what they say they would do. The most common quips I’ve heard foreigners use when speaking of their Brazilian colleagues and suppliers is , ‘They’re fake,’ ‘They’re not committed to work,’ or the classic, ‘They never reach deadlines’. After a few weeks of making such remarks the person resigns themselves to the fact that they’re going to have a hard time getting their project accomplished but they don’t usually take the time to look into why they are interpreting the Brazilian work methods in this manner. Have you ever asked yourself what impression your Brazilian counterparts have of you? Little do we know what negative adjectives they may be using to describe our behaviour while we’re jumping up and down getting upset about a deadline that is not being met. I recently asked a former Brazilian colleague of mine what the most common adjectives Brazilians usually utter about foreigners. She came up with, ‘They’re inflexible, always stressed, and they usually feel that things should be done their way (the foreign way). How can we avoid these negative depictions and enjoy the merge of cultures?

These criticisms (on both sides) often come up in moments of frustration. When we’re relaxed and have time to consider why the people around us are behaving a certain way we usually find an explanation, but that still doesn’t help us achieve our goals and reach our deadlines. We need to go one step further. We need to consider what we have to change in our methods to be more effective when working with culturally diverse people who have different techniques to ours.

The three points I mention below are only an introduction. I shall not endeavour to write more in such a post, the aim of which is to help those of you heading to Rio de Janeiro enjoy the XXXI Olympiad.

Brazil is incredibly vast and has a huge population of over 207 million[1]) made up not only of natives but also a mixture of immigrants mainly from Japan, Germany, Spain, the Middle East, Italy and of course Portugal. It’s therefore hard to say that there is one common way of behaving, of managing teams and of communicating. Paolistas in the south will tell you that they are different to the Cariocas from Rio, who in turn say they are different to the North Easterners, and so it is. Consequently I shall try to stick to a few characteristics that most of the country has in common, with an emphasis on Carioca behaviour; we have to start somewhere.

“How is your grandmother’s hip replacement coming along?”

If you ask a group of Brazilian individuals what their number one cultural value is, it is likely to be, ‘smiling’.  In order to be successful in Brazil the one most important word to remember is, relationship. There is little you can achieve unless you take the time and make the effort to get to know your partners, colleagues and service providers personally before going ahead and making any requests or explaining how something should be done.

Imagine this scene: You’ve been sitting at your computer all morning. Your tummy starts to grumble and you realize it’s lunchtime. You mention to your colleagues sitting beside you that you’re going out to get a sandwich. You pick up your sandwich take it back to your desk and decide to continue working while nibbling at the sandwich. My dear reader, that is mistake number 1 in Brazil. Relationships are a vital part to getting any job done and therefore having lunch with your colleagues and getting to know about their families, their spouses, children, grandmother, aunts, uncles, their cats’ and dogs’ names and their hobbies is a vital part of learning to do business in Brazil. The work sphere and the private sphere are mingled into one. If you are leading a group of Brazilian employees make sure you show your interest in their private lives. Brazilians generally prefer to build a relationship of trust and confidence with the people they do business with. Once they trust you, it will be instinctive for them to want to help you reach your objectives. If your service provider offers you a cafezinho before getting down to work don’t even contemplate refusing, irrespective of how many coffees you may already have had that day. The offer to share a coffee is not just to make sure you feel welcome, but it is a chance for them to get to know you a little bit better before deciding whether they would like to work with you. If you’re working on a big long-term project, take the time for the two hour lunches and don’t talk business over lunch; pull out your phone and share your photos of your nephews, nieces and puppy dogs too.

“I’m sure she said it would be here on Thursday.”

One of the most difficult issues that foreigners in Brazil tend to deal with is having to read between the Brazilian lines. How do you make a decision when you cannot tell if your interlocutor is saying yes or no to your request or when your subordinates don’t open up and debate your ideas. Think about the relationship element we mentioned, add the fact that Brazil is a harmonious culture not wanting to offend anybody (remember the smile) and add a colonial history where the big farmers were boss. It is rare to hear a Brazilian out rightly say, ‘No’. It doesn’t matter how ludicrous he or she finds your request or the fact that a government official in Brasilia cannot possibly get the fifty work permits you requested for Thursday on time for all your staff members to arrive in the country, they will rarely use the word, ‘No’. Instead you’ll often hear ‘vamos ver’ (we’ll see), or, ‘Thursday could be possible’, when in fact Thursday is actually out of the question. So on Thursday afternoon you’re looking at your watch every 20 minutes waiting to receive the fifty work permits for the staff members arriving in the country the next day. You call the official angrily telling her she said they’d be there on Thursday, your blood pressure starts to rise and then the frustrating negative comments start to pour out. Little do you realize that your Brazilian government official had actually said. ‘No’, you just didn’t hear it, or rather you didn’t pick up on it. When making requests or explaining how you would like something to be done, try to pick up on the gestures and facial expressions the person opposite you feels she is openly using. You will learn to read the, ‘No’ and not fall into the mistake of waiting for something that was never intended to arrive.

I’m going to finish on an optimistic note. Brazilians are generally extremely optimistic, ‘Where there’s a will, there’s a way’, or in Brazilian terms, ‘o jeitinho Brasileiro’. You’ve probably heard of it or even seen it done. There is so much admin and bureaucracy to get through in Brazil, that even the Brazilians complain about it knowing very well that all this red tape deters everybody from accomplishing their goals and reaching deadlines promptly. Therefore Brazilians become very creative when having to find solutions to get around red tape and generally in terms of problem solving. They are adventurous and will look for new opportunities to find new ideas. Often they will not even tell you that there is a problem to solve because they’re proud to be able to solve it for themselves using their flexibility. The fact of not knowing there was a problem often leaves foreigners surprised and feeling that the Brazilian is trying to hide some bigger problem. Often they won’t tell you of the problem if they think you’re not the kind of person who accepts bending rules. Rules are not always followed to a T and you may not always want to know how the issue was solved, but low and behold, your event will start on time as per plan, even if it’s a last minute patch up. The backstage may look little untidy but the stage will be as sparkling as the sea at Copacabana beach on a fresh midweek morning with the sunrise beaming over Sugarloaf.